Original Post:
Thought I'd let you know that I have been invited to be the guest blogger for this event taking place next Wednesday organized by the Black Employee Affinity Team of MTV Networks for Black History Month. It is not clear yet if the event will be streamed live or edited for later repost. I will keep you posted as I find out.

I will be tweeting the event live at http://twitter.com/kiskeacity. Please let me know any questions you may have for the panel.

The topic is one I am very concerned about: What Happens when the Media Moves On? That is at the heart of the preoccupation of many in the citizen media world, the good folks at Global Voices included.

Emeline Michel will be performing. 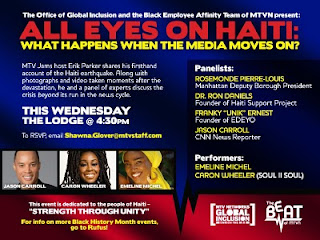 Invited back on Haiti in Focus podcast

Having interviewed me 3 days after my arrival in Haiti (Episode 19) , Scott Hertzog of Haiti in Focus podcast wanted to catch upon my return from the trip 7 days later. The resulting podcast, recorded last weekend, was published in two segments.

In the first segment (Episode 20) which was published two days ago, we discuss the red/zone green zone distinction, the usefulness of citizen media in a country where not everyone reads or writes, ways in which Haitian-Americans lingering on waitlists can be put to good use and much, much more.

The second segment  (Episode 21) was posted today and tackles shelter, bulldozing, how Haitians by and large served as first responders to the earthquake and the "Idaho 10". Enjoy! Your feedback is welcome.


(Cross-posted at Global Voices and at Conversations for a Better World.)

Régine Zamor is a Haitian-American based in New Rochelle, New York, but raised in Brooklyn. Her Haitian family is from Martissant. She decided to come to Haiti after the 12 January earthquake and volunteer on her own, without signing up with a major NGO. She had contacts in Haiti and the Dominican Republic before arriving, having volunteered with Haitian indentured laborers in Batey Ocho, Barahona, in the Dominican Republic last summer. Her family and friends in the United States were supportive of her decision.

Régine is a film producer and writer who just finished a documentary film on street children in Cap Haïtien, titled Bagay Dwòl. She has been blogging about the film and about her first-response volunteering at her blog, Bagay Dwol Journal.

When she initially arrived in Haiti, a couple of days after the quake, she researched where her help was needed and wound up volunteering in food distribution, information sharing — both in person and through her blog — and in medical supplies distribution through various contacts at smaller NGOs such as SOIL, Wynn Farm, and COHEF.

Georgia Popplewell and I met with her at the Hotel Oloffson a couple of afternoons ago.

When I told other Haitians living in the United States that I was traveling to Haiti with Global Voices, many who were on waiting lists with large well-known NGOs and US government agencies expressed dismay. For example, my friend Alex — who holds a masters degree in public health administration and has been working in the healthcare industry in the United States for years — was itching to be picked from a volunteer list. When Régine explained to Georgia and me how she made it to Haiti shortly after the quake, I immediately thought of Alex and all the others waiting in the U.S.

Régine decided not to wait, and in this video she explains how she connected with the work she wound up doing:


(A version of this video with French subtitles is also available on dotSUB.)

I have only spotted one UN-run food distribution line since my arrival here a week ago. It was near the National Palace, and proved so chaotic that either tear gas or pepper spray was allegedly used on the crowd. A handful of UN officers seemed to be handling a crowd of thousands. A system for the distribution of the global influx of aid by either the UN or the Haitian government has yet to materialize. But in speaking to Régine, it became clear that many Haitians and others willing to help took matters into their own hands during the first-response period.

Here Régine explains how she coordinated with an NGO contact in the Dominican Republic to buy food, have it sent to Port-au-Prince, and distribute it to Orphelinat l'Amour du Bon Berger.


Volunteering with the Parc Antoine Izméry Clinic in Delmas 33


When we met Régine at the Oloffson, an American buddy from her hometown of New Rochelle, NY, interrupted our meeting to introduce some doctors to her. Régine left Georgia and me to go and meet them, and eventually introduced us to one of them, an American doctor who has served Haitian patients in the Bahamas for the past 11 years. She turned to us and said: “He just agreed to come to the Sité Solèy Clinic with me tomorrow morning.”

That is precisely what Régine means by her role in “information sharing”. Via word of mouth and using all means available, she has connected tens of people to whatever service needs she has identified or become aware of.

Here Régine shares a bit about the work she has been doing at the medical clinic at Park Antoine Izméry in Delmas 33:

On her blog, she explains how she delivered needed medical supplies to Kenscoff.

Régine's journey is far from over. Like many of the Haitian-Americans I have met in Port-au-Prince, she is planning on installing herself permanently here in the next few weeks. Here are her “Helpful Resources for Volunteering in NYC.”

You can listen to the latest Internews humanitarian information radio program in Creole here:

Here are the headlines that grabbed me:

Farmers in Leogane, Petit-Goave and Grand-Goave are seeing some of their irrigations channels cleared up. In addition, these farmers will start receiving farm inputs and authorized seeds that FAO will be supplying. The Ministry of Agriculture will issue a list of seeds that will be authorized so make sure you only use those ones! We'll tell you more as soon as we can and be aware.

The state general hospital is providing all the services and emergencies for victims of the earthquake. They have reopened the pediatric, pharmacy, lavatory, sanitation, and radiology units. I

EARLY RECOVERY - 100,000 women in camps to join the Cash for Work program –Minister of Women Affairs

The Minister of Women Affairs said that 100,000 women in the camps will be participating in the Cash for Work program and that they will be paid on time. Minister of Women Affairs, Marjorie Michele, said that she has also worked with the police and the "Commissaires de Gouvernement" to put together a team against sexual violence in camps. She will provide more information as soon as it is available.

PSYCHOSOCIAL SUPPORT – Keep your children busy, it is good for them!

World Vision has hired monitors and teachers to go to some camps to work with children. This and other organizations hope to extend this program to many camps as soon as possible, be patient. These specialists teach them about hygiene, provide some basic education (reading, writing), and entertain the children. You, as parents, try also to keep your children busy and entertain, it is good for them.

TRANSPORTATION - 100 ships on their way to Haiti

100 ships are on the way to Haiti, and the authorities are defining a system to decide on slot allocations in Port-au-Prince. Food and non-food items had to be transported through Santo Domingo or from other ports in Haiti where they could unload their cargo.

Thought I'd post this Internews Briefing. Contains great updates and stats. (Internews is an organization in charge of relief information propagation on Haitian radio stations.)


HUMANITARIAN UPDATE - Facts & figures
The most urgent issue remains shelter for the hundreds of thousands of displaced people. Plastic sheeting is prioritized over tents -  7,000 latrines will be installed in the camps of all affected areas - 100,000 people have received food as of January 31 - Vaccination program starts on Tuesday February 2 in temporary camps -  more than 482,000 people have left Port-au-Prince for outlying departments after the earthquake, a vast majority is staying by host families  -  Schools have reopened in the non-affected areas. Between 2,500 and 4,600 schools have been affected by the earthquake.

SECURITY - 14 suspected assailants arrested
14 suspects were arrested by UN soldiers and the Haitian National Police, near Jeremie. They are suspected of putting up barricades to stop a food convoy that was coming out of the airport. A few days before, 20 people were arrested in Kafou Katon for having tried to stop a convoy, that was also bringing food from the same airport.

FOOD - Distribution going on
Food distribution that started on January 31 is gaining momentum. In 14 distribution centers, women and men are standing in line to receive their bag of rice. This reportage produced in Canape Vert  explains how the distribution works.


WATER - Canadian forces are producing drinking water
A canadian contingent has started producing drinking water in Jacmel. They can produce up to 48 liters per minute.
ASSESSMENT - Light and latrines needed in the camps
Food, water, shelter, and health are the main issues that come up during the assessment conducted by humanitarian organizations to find out the needs of the populations in the camps. More than 90% of displaced people need adequate lighting and distinct latrines for men and women.
SHELTER - Assessment of public and some commercial buildings
The Haitian government has published a number where people can turn to (3 49 13 261) to ask for the evaluation of public buildings, such as schools and hospitals, by engineering experts, and some commercial buildings like hotels.
NUTRITION - Cases of acute malnutrition among children
Humanitarian organizations have identified children suffering from acute malnutrition. UNICEF is working with haitian NGOs in looking for ways to support pregrant women and breast-feeding women.
HEALTH - Launch of vaccination campaign
A test campaign was conducted on Sunday January 31 at the Silvio Cator football stadium. A larger immunization campaign has started today in temporary camps of Port-au-Prince. The vaccine protect against rubella, and diphteria-tetanus-pertussis, for children under 7 years of age. The campaign targets 600,000 people.


CAMP MANAGEMENT - New site in Kwa Debouquet
The site of Kwa Debouquet is about 10 ha large and is expected to host thousands of IDPs from the largest camps of the capital. The government said it will create smaller camps inside Port-au-Prince to free up the space inside the schools such as Saint-Louis-de-Gonzague.


CONSTRUCTION - 3 sites to dump the rubbles
The commission on evaluation and construction has identified 3 sites where the rubbles will be dumped : Croix Desbouquet, Carrefour, and Tabarre.  The initial evaluation estimates that there are 16 millions tons of rubbles to evacuate.
CUSTOMS - Control of non humanitarian goods
The Haitian and Dominican governments start again to check and tax goods that cross the border between the two countries. These controls do not affect humanitarian goods.


GOVERNMENT - State of Emergency extended
The Haitian government has extended the state of emergency throughout the country for 15 more days. The state of emergency allows the governement to suspend individual liberties, and take exceptional measures including confiscating homes, cars, etc.

For more information and to pass us messages for affected communities:
Jacobo Quintanilla, Humanitarian Coordinator (info-er-haiti@internews.org - +509 348 59387)

Préval on his legacy (translation of Miami Herald Interview)

Haitian President René Préval gave this interview to Jacqueline Charles of the Miami Herald in Creole a couple of days ago. In the interview, Préval talks about the challenges of his two terms in office as well as the growth the country experienced under him.  I found it informative given that I myself have been a critic of his lack of visibility during the crisis and thought it was worth translating to English.

Here is the clip's translation:

"Four historic events happened during my presidency:
So these are the four major events we had to tackle in four years. Obviously, that was an extremely challenging term.

Nevertheless here is our legacy: