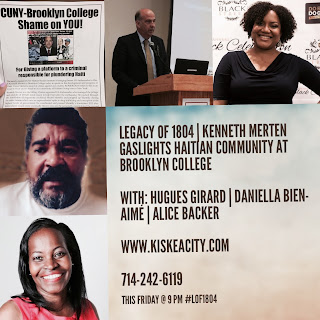 Join me this Friday night (tonight) at 9PM as I summarize and play various reactions to U.S. Ambassador Kenneth Merten's recent visit to Brooklyn where he purported to offer a Retrospective of US Foreign policy in Haiti after two panelists who conveniently spoke only of Haitian government weaknesses. Merten's remarks looking back at US Foreign policy in the last 20 or so years were very short and he scraped the surface of the many serious blows dealt to Haitian rice farming, the Black pig and to the country's infrastructure through the 90s embargo.

But most of all, Merten bamboozled the community when questions were raised about his involvement in announcing election results in 2010 that were contrary to what two electoral council members and a former OAS official found to be the actual result.

The event was protested by KOMOKODA, a grassroots organization who felt Brooklyn College should not have invited someone with Merten's destructive policies towards Haiti to speak at the new Haitian Studies Institute.

Listen to reactions by Dahoud Andre of Komokoda, Daniella Bien-Aimé of the Bien-Aimé Post and Hugues Girard, among others.


(This show will likely be pre-recorded as I am jet-lagged and away at an open knowledge conference but there is a chance I may do it live. Please be indulgent as technical problems may arise from my hotel wifi.)

(Parts of this message may not be visible to those reading via email. Please visit kiskeacity.com if needed.)

Another amazing show full of serendipity what with Professor Claude Joseph, one of Merten's co-panelists calling in to offer his views of the event. We were also joined by none other than Dady Chéry of the News Junkie Post who offered, along with Hugues Girard, that listeners and guests of this show need our own think tank, one not commandeered by the State Department or dismissive of the protests and concerns of entrenched Brooklyn community groups such as Komokoda.

We listened to clips of questions asked of Merten at the event by Daniella Bien-Aimé and me respectively on Merten's changing of official elections results in 2010 and the US' role in centralizing the Haitian government in Port-au-Prince.

We also discussed panelist Vanessa Léon's implied thesis that the problem with US Foreign Policy in Haiti is Haitians and the Haitian government. 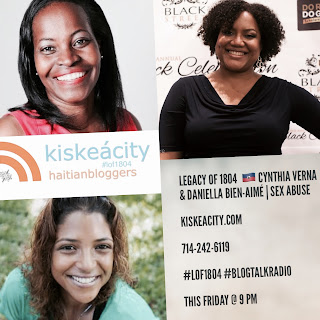 Join me this Friday at 9PM as I welcome Cynthia Verna and Daniella Bien-Aimé to discuss rape and sex trafficking in Haiti and answer the question: is there a way to use technology to prevent these problems?

Daniella Bien-Aimé offers musings on Haiti and technology at The Bien-Aimé Post.


You can listen live or archived at the below player or at http://www.blogtalkradio.com/pancaribbean/2017/03/25/legacy-of-1804-cynthia-verna-daniella-bien-aim-rape-trafficking-tech. You can also listen live only at 714-242-6119.


(For those reading this via email part of this post may not be visible via email.  See the full post and post-show notes at kiskeacity.com.)

So much was accomplished on this show and so many seeds were planted! Especially in the last 35 minutes or so, when Ezili Dantò called in. Almost a perfect storm. 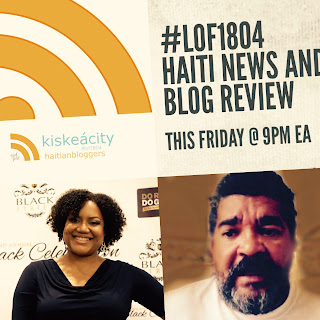 Join me this Friday night at 9:30PM (not 9!)  as I discuss the latest Haiti news with Hugues Girard.


(For those reading this via email part of this post may not be visible via email.  See the full post and post-show notes at kiskeacity.com.) 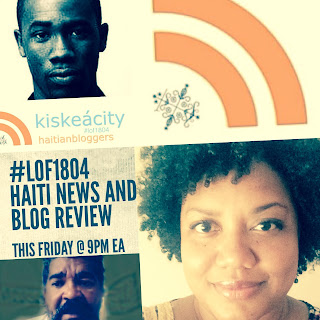 Join me tonight at 9PM as I am joined by Samuel Maxime of Sentinel.ht and Hugues Girard to discuss the aftermath of René Préval's passing exactly a week ago: the autopsy requested by his wife, the Senatus letter, Jerry Tardieu memes and other theories.

(For those reading this via email part of this post may not be visible via email.  See the full post and post-show notes at kiskeacity.com.)

This Friday night at 9PM, join me and co-host Hugues Girard as we go over the week's news about Haiti and Haitians.

Topics: Kanaval expenses in Haiti, Sweet Micky's not so "PG" outburst in Okay against two prominent journalists and what it means for Jovenel Moïse | Café Philo discussion on mining in Haiti | Rape survivor Cynthia Verna's outburst on the arrest of a 60-year-old for the rape of an 11-year-old | The arrest of an American missionary for pedophilia.

(For those reading this via email part of this post may not be visible via email.  See the full post and post-show notes at kiskeacity.com.)

Minute 40-End: Clip and commentary of Martelly at Kanaval Okay; Discussion of Cynthia Verna triggered on Facebook Live; Discussion of Arkansas missionary Daniel Pye jailed in the US for child sex tourism in Haiti; Discussion of mining in Haiti.