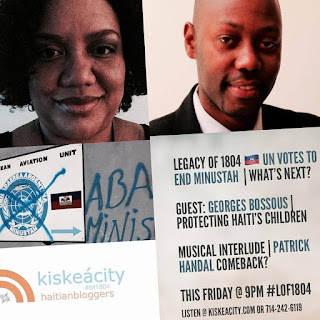 Join me this Friday  (tonight) at 9PM to discuss the UN's vote to remove its "peacekeeping" forces by October of this year.  Is this just a re-brand? What now?

Georges Bossous Jr. of Word and Action will be our guest to offer expertise from his experience as a psychotherapist on healing Haiti's children of the sexual abuse and rape endemic to the UN occupation and very present in Haitian churches.


Musical Moment with Patrick Handal of Skandal. Is this hitmaker of 90's Konpa Nouvèl Jenerasyon making a comeback with his new single Santim Wo? He will join us in an interlude to answer.


(Parts of this message may not be visible to those reading via email. Please visit kiskeacity.com if needed.)

Georges Bossous Jr. talked about Word and Action's main goal: to create a full-service rape crisis and healing center in Haiti. He also discussed the recent sets of settlements to boys in Haiti who were sexually abused by Christian missionary Douglas Perlitz. The boys, most of whom now live in the streets, were each awarded $300K by Connecticut courts but no therapy, financial management or guidance.  Bossous strongly urges that whatever future settlements are awarded by the UN or other NGO's and missionaries adopt a wholistic approach incorporating healing.

Between 00:31 and 00:50 we were joined by Patrick Handal of Skandal who discussed the context of the rise of Konpa Nouvelle Génération after the departure of Baby Doc in 1986. We listened to a soon-to-be-released remix of his 1988 hit Ti-Bway and his new single and video Santim Wo. All will be featured on an upcoming comeback album titled 50 Kòb.

Listen to the full show to hear frequent contributors Hugues Girard, Daniella Bien-Aime and Jafrikayiti weigh in on Ezili Dantò's proposed demands to the UN Secretary General. (That discussion is in the last 25 Minutes of the show.)


Articles/Clips discussed during the show: