Legacy of 1804 Vertières Special | Dreyfuss: Only Haitians Can Save Haiti #LOF1804 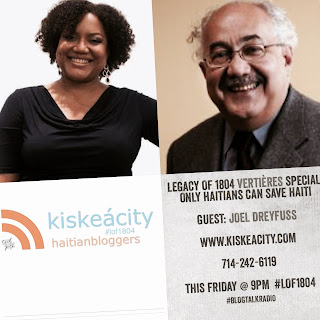 Join me this Friday (tonight) at 9PM as I welcome journalist Joel Dreyfuss. We discuss his recent Washington Post article Only Haitians Can Save Haiti, the media's failure to predict Trump's win and his forthcoming book on 300 years of his family in Haiti.


Joel Dreyfuss has interviewed Apple co-founder Steven Jobs, music legend James Brown and long-time Toyota president Soichiro Toyoda.  He has been a top editor at the leading technology magazines, including PC Magazine, Information Week and Red Herring, a senior editor and Tokyo bureau chief at Fortune, New York bureau chief of USA Today, executive editor of Black Enterprise and a feature writer and music critic for The Washington Post.  He was managing editor of The Root  from 2009 to 2011. His freelance writing has appeared in the New York Times, Los Angeles Times, Playboy, CNBC.com, The Huffington Post, Tikkun and many other publications. He co-authored, with Charles Lawrence III, The Bakke Case: The Politics of Inequality, a book about the first affirmative action suit to reach the U.S. Supreme Court.  A native of Haiti and long-time New Yorker, Joel now lives in Paris, where he is completing a book about his family’s 300-year involvement with Haiti.