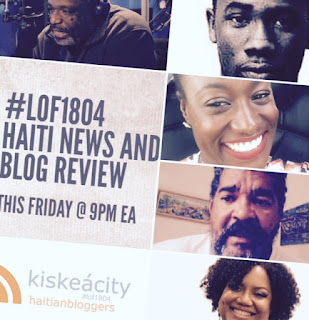 This Friday at 9PM, join me and the star panel who predicted Trump's win on last week's broadcast as we reconvene to discuss the results, the shock of how awful the out-of-touch mainstream media was at predicting the outcome and what to expect from President Trump's foreign policy in Haiti.

We'll also be joined by:

CORRECTION TO AUDIO: During this live broadcast,  I said that I thought that Dahoud might have voted for Bernie Sanders in the Primaries. Dahoud wanted me to rectify that he is not a US citizen and thus could not have voted in the US election. In Dahoud's words: "KOMOKODA had asked Haitians to vote for Bernie Sanders for the same reason it asked them to vote for Donald Trump, as a means to stop the corrupt and criminal Clintons from getting back to the White House. Definitely not because of any ideological affiliation or because it believes that either Sanders or Trump would be a friend of Haiti."


You can listen to past shows on iTunes by searching keywords 'Legacy of 1804'. Past shows are also available at http://www.kiskeacity.com/search/label/LOF1804. On Twitter: react to or ask questions by using the hashtag #LOF1804