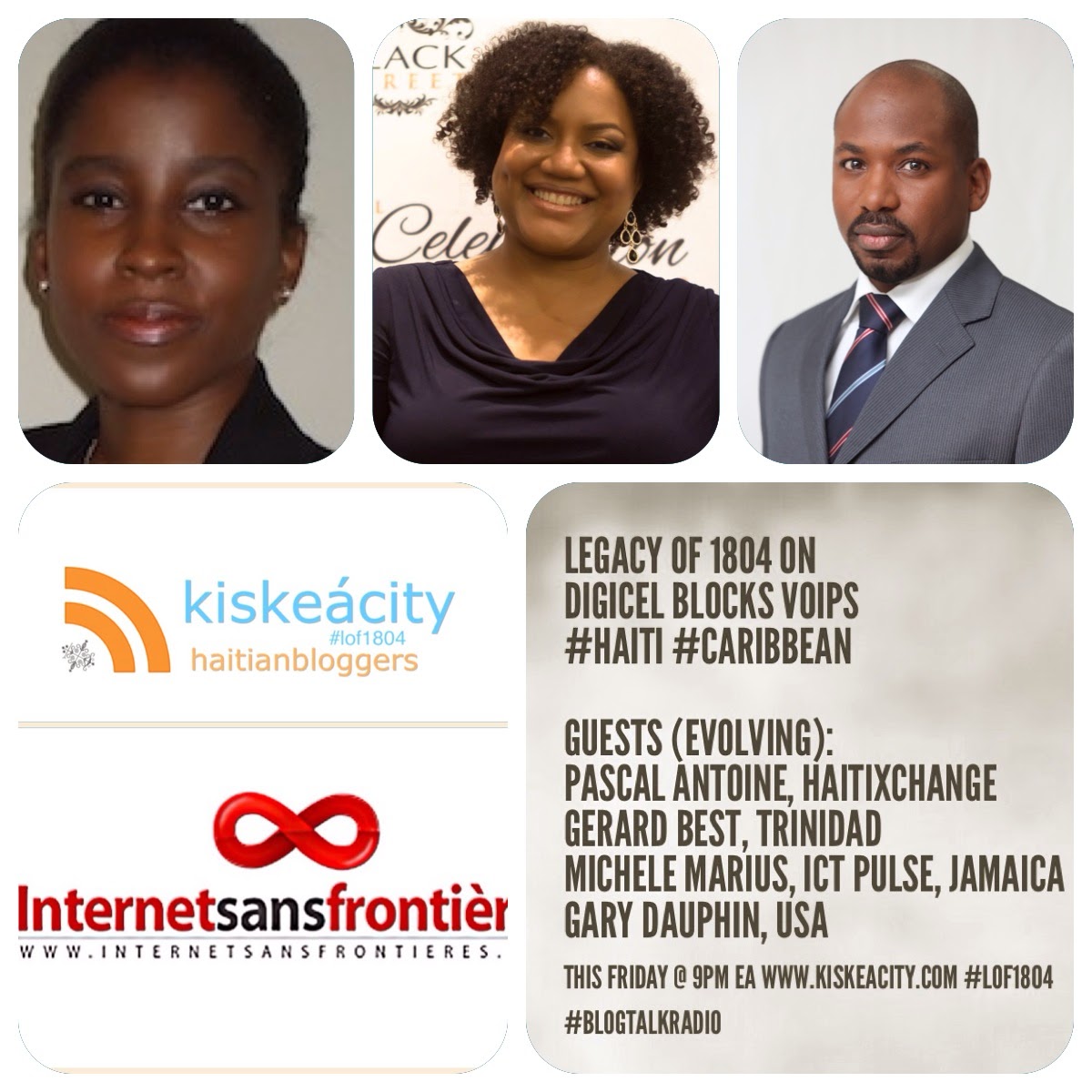 Digicel has blocked VoIP access (Viber, Tango etc) in Haiti, Trinidad and Jamaica. Other cell phone carriers such as Lime have done so as well. This has generated a firestorm on Caribbean social media, at least one petition and a reaction by the Trinidadian Telecom regulatory body which reinstated VoIPs in Trinidad while it deliberates the issue.

Join me in my capacity as LOF1804 weekly host and head of  the Americas Desk  at Internet Without Borders this Friday July 11 at 9PM EA as I welcome:

For more background on the issue:

You can listen to past shows at http://www.kiskeacity.com/search/label/LOF1804 or by searching "Legacy of 1804" or subscribing to the Black Whole Radio feed in iTunes.

We have a new show link because of technical difficulties:
I'm broadcasting live on the air! Listen in now at http://tobtr.com/s/6670679. #BlogTalkRadio #lof1804 #digicel #VoIPs

Speakers gave us an update of where things stand in their respective jurisdictions. In Trinidad services have been restored while TATT deliberates. In Haiti and Jamaica, applications are still blocked.

Pascal Antoine pointed out that Digicel's competitor NatCom has not blocked VoIPs.

Why have Haiti's Conatel and its Jamaican equivalent still not pronounced themselves on the VoIP block?
Why are cell phone providers doing this block now?
Have workaround applications to the block surfaced in the Caribbean?
How long have cell phone providers wanted to block VoIPs? According to Michele Marius this is just the latest development in a long battle between carriers and VoIPs.
Is this a dangerous precedent for net neutrality in the region and globally? What if Digicel decides it wants to block an app by a Haitian congressional candidate it does not like?
What is the state of Caribbean innovation?


Gerard Best generously curated the following links for us during the show:

TRINIDAD AND TOBAGO
Digicel wants Viber, Tango, Nimbuzz providers to pay
http://www.guardian.co.tt/news/2014-07-06/digicel-wants-viber-tango-nimbuzz-providers-pay
The T&T Guardian reported that Digicel agreed to allow its customers to access VoIP applications Viber, Tango and Nimbuzz once again after the Telecommunications Authority of T&T (TATT) started an investigation into complaints made about Digicel’s action. http://www.guardian.co.tt/news/2014-07-09/digicel-returns-voip-services