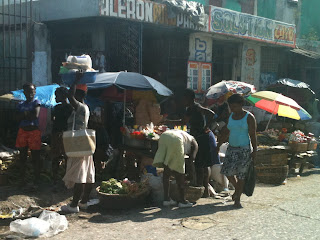 "The provision of locally-grown foods to Haitians has become almost as difficult as the provision of water, as a rash of arson has hit the country’s open-air markets. Markets in Gonaives and in the Saline, Tabarre, and Petionville areas of Port-au-Prince, where many farmers store their goods, have burned in suspicious fires. Traders in the Port Market, in particular, reported having received numerous threats before the market went up in flames on June 18 and again on July 13, 2012. To make matters worse for small merchants, the government has instituted a series of bans on vending in city streets and imposed difficult conditions for transit. For example, buses and tap-taps are no longer allowed to transport passengers together with their goods or livestock. Haiti’s agricultural production had already dropped by 20% between 2010 and 2011, but the continued persecution of the small farmers, coupled with a liberalization of trade with the Dominican Republic, through which much of Haiti’s food is now transported, have essentially wiped out the country's domestic production." Haiti: Where Demolition and Exploitation Pass for Reconstruction and Development | Dady Chéry | NEWS JUNKIE POST http://ht.ly/gLiR6