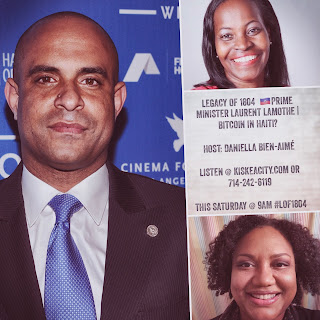 
When: 9AM this Saturday (i.e. this week's show will not be held during our usual Friday at 9PM slot)

MAKE SURE TO CALL IN AND ASK YOUR QUESTIONS!

We had a great and diverse conversation with former Prime Minister Laurent Lamothe with lots of questions from listeners and a very active tweetup which you can find below.  Lamothe explained what bitcoin is and why he believes it is a good technology to adopt in Haiti, including by the Central Bank issuing a haitian cryptocurrency. Such tool would change the way the diaspora sends money, making it cheaper and could be used to streamline the process of paying for government services such as electricity.  Cryptocurrencies would also foster ease of commerce among Haitians and with the world by bringing better payment systems to Haitian micro-enterprises. Lamothe expounded on the need for the diaspora to empower itself through electoral representation in the United States, including to better represent the interests of 68,000 Haitian TPS holders. He felt that the diaspora needs to be as focused on its empowerment in countries where they live as as they are on Haitian politics. He specifically mentioned the use of forums such as LOF1804 in Haiti and the diaspora and potential Haitian Diaspora Bitcoin Associations to educate the haitian public on cryptocurrencies.

We had callers from all over the diaspora including Canada, Florida, Haiti and Boston, among others.


Many callers had technical questions about blockchain technologies generally such as smart contracts and the desirability of an eventual Haitian diaspora bitcoin bond. Other callers expressed skepticism at the propriety of going after this technology in a country where people have so many unmet needs and whether its adoption will only benefit those living in Montagne Noire (i.e. the elites). One caller thought that Haiti does not really have an economy but an oligarchy which controls things through monopoly. Lamothe agreed and argued that increased foreign direct investment could be a solution to this problem. As Lamothe served as prime minister of Haiti under the Martelly administration for two years, there were inevitably questions about his tenure, including his unmet promise to bring electricity to all Haitians in 6 months and the neo-duvalierist leanings of the Martelly administration.

We closed the show discussing Lamothe's smart village project in Nan Panyol and his vision for Haiti going forward.