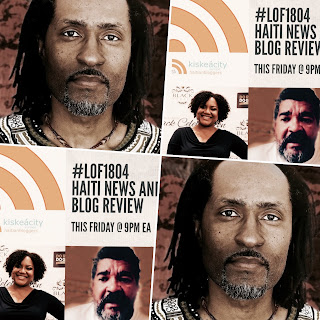 Join and co-host Hugues Girard, commentator Jean  Elissaint St-Vil and me tonight at 9PM to discuss the latest Haiti and Haitian diaspora news including:

(See pre-and post show notes and highlights at kiskeacity.com. Parts of this message may not be visible to those reading via email. Please visit kiskeacity.com if needed.)

Announced issues were discussed in the following order:


In addition to my announced guests, Hugues Girard and Jafrikayiti, we were joined by Dr. Judite Blanc, a professor at UEH who has been held hostage in student/faculty negotiations in the past. In a long intervention in Kreyòl, Dr. Blanc deplored various Haitian stakeholders' indifference to the running over of a student (John Rock Gourgieder) by a car by of Professor Yves Blot. She explained the deterioration of the atmosphere at UEH and recalled her days as a student there when faculty actually debated issues rather than the current climate where violence seems to be the initial means of conflict resolution. She surmised that the social extraction of the students, who come from the most disadvantaged backgrounds in Haitian society, probably explains both the tensions between them and their middle class professors and the general indifference to or worse, endorsement of the violence with which their legitimate demands as students are met.

Jafrikayiti Jean Elissaint explained that based on his reputation as a leftist many are shocked that Professor Yves Blot could have committed such an act but also condemned it. (Note that the same sentiment is expressed by Dahoud André, host at Radyo Panou's Eritye Papa Desalin on Monday June 19th's installement of that show.)

I found out after the show that a petition is now being circulated in solidarity with John Rock Gourgieder, the student who was run over by a car on the UEH campus.