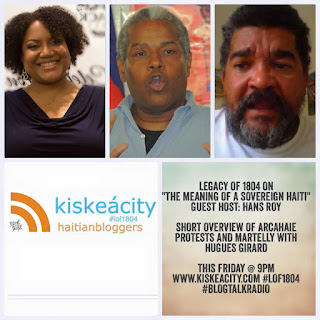 Join guest host Hans Roy this Friday at 9PM as he tackles the concept of a sovereign Haiti in today's world.


Hans Roy's Synopsis: As we moved towards the end of the 20th Century, many believed the idea of  the nation state would become the norm, yet the Post Soviet Union and Post  9/11 world displayed  just the opposite. Unipolar, with one Super Power, the world seemed like a very dangerous place for small countries, especially those with resources, unless of course, they were loyal to the Super Power, the bully on the block. Recently, Paul Craig Roberts, who served as Assistant Secretary under Reagan, called European countries "Vassal States" when it comes to their foreign policy. If this is true, how do less powerful countries maintain any semblance of sovereignty? Do Haitians today really care about becoming a sovereign state? Is it something that we will see in our lifetime?

We will also get a brief overview from Hugues Girard? of the recent protests in Arcahaie against another looming land grab which would redistrict a whole portion of the town under the name Arcadins.