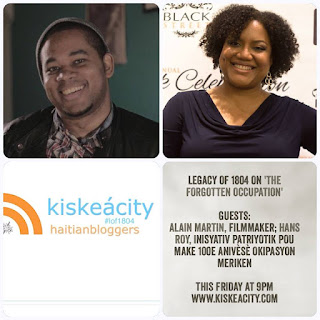 Join me and guests tonight at 9PM as we discuss "The Forgotten Occupation",  a new film on the U.S. Occupation of Haiti previewing this weekend at 100th Anniversary commemoration events in Brooklyn. With filmmaker Alain Martin and Hans Roy of Inisyativ Patriyotik Pou Make 100yèm Anivèsè Okipasyon Meriken.


You can listen to talks by Jean-Claude Icart on Jacques Roumain during the Occupation and Berthony Dupont of Haiti Liberté that took place during commemoration events in Brooklyn 7/25 and 7/26 here: http://www.kakola.org/kreyol.html

Alain Martin saw a parallel between armies of US "volunteers" after the EQ & the US army who invaded Haiti during US Occupation. #LOF1804
— Alice Backer (@kiskeacity) July 25, 2015