This film by Kervans Barthelemy starring Atibon Nazaire and Caroline Memnon was greeted by a standing ovation at the HCX filmfest at LIU's Brooklyn campus last weekend. HCX executive director Régine Roumain said it was the only film at the festival dealing with the Haitian diaspora experience and one of the best attended. It is hard to believe that filmmaker Kervans Barthelemy is only 25 as this work is going to have a major impact. Cast and crew were all present at the screening and were asked to stand up.

Other films included Children of Haiti for which I moderated the Q&A,  Moloch Tropical by Raoul Peck, When the Drum Is Beating which aired at the opening night fundraiser, Jean Gentil, Gospel of the Creole Pig, various Jacmel-based Ciné Institute student pieces and Arnold Antonin's latest work. View the festival's program and film details  here.

There are two Kaleb trailers but my favorite is this one: 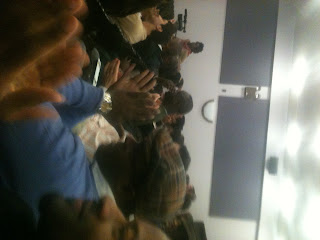 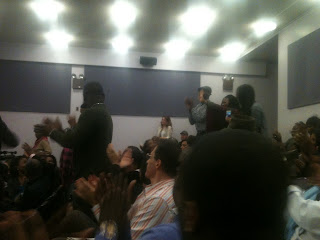