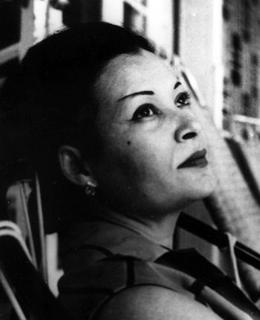 New Yorker Marie Vieux Chauvet's "Amour, Colere et Folie" trilogy was finally re-published this year after decades of muzzled oblivion. The first story "Amour" is a delight and an ethnographic jewel. This is a woman-centered haitian novel written by a most adventurous writer, a controversial pioneer whose vivacious and uncensored prose angered many. Chauvet passed away in New York in 1973, as critically acclaimed Edwidge Danticat turned 4, and almost 20 years before the launch of the Women Writers of Haitian Descent (WWOHD) collective.

"Amour" is a must-read for caribbeanists who want to get a handle on post-occupation Haiti (read post-1934). It is also a good read for those French readers --nope, no English translation yet-- who like a good well-told story. The protagonist Claire narrates the prelude to the Papa Doc years as lived by a peculiarly Jeremie reminiscing southern town and its "white mulatto" bourgeoisie; that strata's women and their strategies in coping or not with sexual repression; its unease with dark-skinned upward mobility and its own downward mobility; its ambiguous relations with desirable and not-so-desirable Others including Americans, Frenchmen, Syrians and peasants; the heightened violence of the pre-Papa Doc years and so on.

To her proxy-white family's distress, and despite her name's connotations, Claire has the mahogany skin of her paternal great-grandmother. Her sisters Felicia and Annette are respectively a pale blond and a barely-sun-kissed blue-eyed brunette. Claire's skin tone, a bad card dealt by the genetic lottery, contradicts generations of selective mating on the part of her ancestors. Still, Claire is the oldest and probably the smartest of her sisters, and her milky-skinned Dad has groomed her to succeed him in managing the family's coffee fields and its workers.

Unlike her sisters, Claire is the sacrificial virgin who never marries, the archetypal old maid stuck in a paralyzing bind. She's respected as a seasoned oldest, enjoys a certain authority and finds herself echoing and even enforcing the clan's imagined endogamous traditions despite her own dark skin. Simultaneously, she has a hard time dealing with her sexual and creative repression and finds many of her peers' prejudices revolting. She lives out her repressed longings for escape and adventure through an obsession with Jean Luze, Felicia's French husband, a handsome world war veteran who collects music and books. Her voyeurism is her only sexual outlet and she experiences her sexuality vicariously through her sisters, particularly through Annette whom she pushes into Jean Luze's arms.

I'm still working through the book's many layers so expect many more posts on various aspects of it in days to come. Unfortunately, the book has not yet been put into english but if yours truly can help it, we'll be lobbying for that shortly. (Wink-wink.) I'm well aware that Lilas Desquiron's Reflections of Loko Miwa also deals with pre-1964 massacre Jeremie but haven't read it yet so we'll have to draw parallels later. Should be fun!

Thanks for this, Alice. When was the novel first published and why was it censored?

good to see this sort of stuff. looking forward to more. thanks for the link and the kind words.

It was published in the 60s, I think, and accounts vary but her family ended up buying back all of the initial copies for fear of persecution by Papa Doc.

You will definitely enjoy Desquiron already classic book
" Les chemins de Loco Miroir" May I recommend that you read the french version not the translated english version.

By the way there's a rumour (not verified by MOI) that some independent film company bought the rights to "Amour,colere et Folie."
If true, my pick to play Claire is haitian actress Fabienne Colas!
or Emeline Michel~

That's some good news. The book is ripe for the screen. Shamefully I still haven't read the whole thing although I've made it through most of Amour. The ending is rather shocking but it's good. Very Chauvet.

Anonymous,
I'll post on Loko Miwa when I do get to it.

Thank you both for posting.

Dear Alice,
I'm a friend of Figgy's; sorry I didn't get to meet you recently, but hopefully soon!

Just today, on a Caribbean Lit/History list serv run by Humanities Net (H-Net), there was a query about Marie Vieux-Chauvet. I referred the woman to your blog here, and to a two-part special issue of the African diasporic literary journal CALLALOO, which was devoted to Haitian literature and culture: Volume 15, Number 2, Spring 1992. This is where I first heard of Chauvet, and is where the only published English translation of an excerpt of Amour, Colere et Folie can be found (to the best of my knowledge). It also includes an interview with Chauvet's daughter, writer Erma Saint-Gregoire.

"The book was received with ardent interest in 1968. But the few copies that were still in the bookstores in Port-au-Prince were grabbed by a mysterious buyer. Later the book was sold clandestinely, sometimes sent all the way from New York. It was rumored that the book became the President's beside reading and that he vowed my mother eternal hatred. I can understand why my family was afraid: we were dealing with a madman. Amour, Colere et Folie was the first fictional Haitian account of the Francois Duvalier regime." (p. 466)

In the 13 years I've been waiting for a translation since reading CALLALOO, I could have learned to read French. Shame.

Hi Miss Tisa,
The book is ripe for translation. Apparently, french lit profs were using photocopies of even the French version because even it was silenced for so long.
Too bad we did not get to meet.
Make sure to come back and visit.
Thx for the quote, BTW.

Alice,
My family is from Jeremie and I actually lived there as a toddler.
When my mother was growing up, there were many "Claires" around who nevermarried, waiting for a foreigner who never came.
Since you read French, you should check out the old Belle Époque novels such as Les Tazar(sp) by Fernand Hibbert. I have no idea if they are even available in America or even in newer editions in Haiti for that matter. It's funny how Haitian society was static for such a long time.

Hey MB,
You posted this a while ago. Sorry. I did read Les Thazar and Sena by F. Hibbert and loved both. Unfortunately, I think they're out of print.

will there be a movie made from that book or not? If yes, I would definitely recommand that Fabienne Colas play the role of Claire or any of the principal roles, she looks gorgeous, sexy, mature and can play all kind of character...Besides she speaks english, french, creole and spanish...